Quick and Easy to Make American Comfort Food You Can Have Here in Thailand.

Quick and Easy to Make American Comfort Food You Can Have Here in Thailand.

When I first came to Thailand back in the Middle Ages there was one store, Kasem Store, which still exists BTW, here in Chiang Mai where you could get imported foods.

Now, there are lots of supermarkets and malls where imported foods are available. But just like before, imported goods are quite pricey, and usually highly processes with lots of salt and sugar, so I tend to avoid them. And even though I eat Thai food almost daily I still sometimes crave something less spicy, less exotic, something like my old American comfort food, especially when I am watching a movie or American football on TV.

Whenever you get the “munchies” you can find good, chemical-free homemade potato chips, roasted peanuts, and half a dozen kinds of pork rinds at Thai outdoor markets, and Tesco Lotus has some tasty, freshly popped, faux buttery popcorn. So that helps. But I often long for some good comfort food from home.

Comfort Food: food that provides consolation or a feeling of well-being, typically any with a high sugar or other carbohydrate content and associated with childhood or home cooking.

Comfort food also needs to be cheap, quick, and easy to make. So after some experimenting we learned to make some of my favorites.

Here are a few you-can-pick-up-anywhere-in-Thailand foods that we can turn almost instantly into down-home-American-comfort-foods. The ingredients we use are freshly made non-processes foods. They’ll only take me a minute or two to prepare and then I can sit down and watch that latest Jennifer Lawrence movie or my Seattle Sea Hawks football team as I pile on the calories and reminisce about the old homestead.

What you need: We are not talking about waffles from scratch here. That’s too much work for my comfort. In just about any Thai market, mall, or supermarket complex you’ see Thai waffle-maker-street-vendors. They will have waffles mixed with all sorts of things from bananas, coconuts, chocolate, etc. The waffles are 20 baht each and they taste great. I usually choose the plain kind. The vendor will warm them up right there for you since waffles in Thailand are a walking snack. I tell the waffle seller to just wrap it up without heating and that I will be eating it tomorrow morning – waffles are American breakfast food. She stares at me like, “That’s weird” so I give her a cross-cultural lesson about how Americans eat waffles.

The next morning, 30 seconds in the microwave, loads of butter, and I like the fake maple syrup, like Log Cabin which you can buy here, instead of the real kind or honey. What can I say, I was brought up on fake maple syrup and that is one of the definitions of comfort food, right? You can also add some local strawberries, or mangoes and you have a comfort food breakfast.

Time to prepare: about 10 minutes

You can get pizza almost anywhere in Thailand where there are Expats living. In my neighborhood there are 6 pizza shops in just a few blocks (and because there are so many, none of them are doing great business); and I’m not counting the Pizza Hut and Pizza Company in the nearby mall. But they are all quite expensive and considering how inexpensive the ingredients in a pizza are I usually balk at paying such a high price. So we make our own.

What you need: The hardest pizza ingredient to get is the bread. Supermarkets and Macro have frozen pizza bread but they are quite expensive. There was a time when all you could find in Thailand was loaves of white bread. But lately Thai bakeries are getting pretty good. We pick up some inexpensive locally made pita bread or other flat round bread for our pizza.

Then it is just adding the toppings you like. There is tomato sauce of course, and cheese. We like the locally made mozzarella cheese. Mozzarella is originally from southern Italy made from water buffalo milk. Well, who has more water buffalos than S.E. Asia? So the local mozzarella cheese is inexpensive and pretty good. There are some local sausages that work okay on pizzas but we have a buddy who travels to the U.S. a couple times a year and brings us some pepperoni that we use on our pizzas. A little while in the toaster oven and I am ready to binge.

We usually make a bunch and freeze some – but honestly, they don’t stay very long in the freezer because I like binge pizza eating along with binge TV watching. And btw, since I am from New York, the capital of pizza making, I could never show my face in Manhattan again if pineapple ever touched a pizza of mine.

For those who may not know, Chiang Mai has some pretty chilly winter mornings and evenings. The temperature can get into the teens Celsius, and even though for my friends back in Seattle that would be a shirtless, shorts wearing day, here it is sweater time, and the perfect time for a steaming cup of hot chocolate to wake up to, or to go to bed to.

What you need: The Thai-Danish Dairy in Thailand produces milk in boxes. Foremost and Meiji are other brands but I find them a bit too sweet. And the boxes don’t have to be refrigerated unless you open them. They sell 4 kinds of milk, plain whole milk, 2% milk (which I don’t consider real food), sweetened milk (the Thais favorite), and chocolate milk. Take a box of chocolate milk, if it is too sweet I just add a little plain milk to it, put it in a cup and microwave it for a minute or two. Add a roti (fried sweetened Indian bread they sell here on the street) for a bit of exotica, and what a treat for a cold Chiang Mai morning with some waffles for breakfast or an evening binge-watching past episodes of Game of Thrones.

America has lots of regional foods but if you were to ask what is the most eaten American meal it would probably be the sandwich (of which hamburgers are a member). Sandwiches made in Thailand leave something to be desired. Their cold cuts are simply wrong.  It is sort of like trying to speak Thai but leaving out the tones. There is just something missing.

But as I said earlier, the Thais are getting pretty good with bread. So I get the fixings in a local Thai market, the bread at a supermarket or mall and make my own sandwiches.

Note: The Rim Ping Supermarket chain here has all shapes, sizes and varieties of great locally made bread (some of which they get from Farang bakers out in the Chiang Mai boon docks kneading and sweating in front of their ovens). I also like the baguettes made right at the Macro markets. There is also a Japanese bakery chain called Yamazaki which makes great pastries and all kinds of good bread. The point being, we now have lots to choose from.

What you need: There’s lots of chicken for sale in the local markets, most lots better than the ubiquitous KFCs just about everywhere. I kind of like the chicken form the Five Star push carts which are usually situated on the edges of most Thai markets. They make a really good chicken roll that sliced makes a great chicken cold cut.

A “Colonel” doesn’t have any stars.

You can buy these sticks of barbecued pork just about anywhere in the country. They are a bit sweet but very tender and make for a great sandwich.

And with your favorite ingredients and some of that good local bread, munch on.

This is a special drink from my youth. It is a New York secret but I’ll share it with you. Egg creams were sold at lunch counters and soda fountains in The Big Apple and Brooklyn; these mostly don’t exist anymore. So neither do the egg creams except at some specialty shops in Manhattan.

A note here: Egg creams have neither eggs nor cream in them. How they got the name is a mystery but it doesn’t take away from how great they taste. For history buffs you can read about its origins here. And I don’t know why they are specific to New York. They are so easy to make. All they used was milk, chocolate syrup and “seltzer water”.  Maybe I’ll make chocolate egg creams a special Chiang Mai drink.

What you need: This is the antithesis of the hot chocolate mentioned above, but uses the same Thai-Danish chocolate milk, as cold as you can get it. You’ll also need an ice cold bottle of “soda” aka club soda; the one that everyone here mixes with their whisky.

Pour the soda into a glass about a third of the way. Then pour in the chocolate milk to taste and stir. The order is important or you’ll have foamy chocolate all over your kitchen counter. Add a straw and you are back on the Lower East Side of New York in the late ‘50s Some of those potato chips or popcorn you bought in the market would be great right about now too. 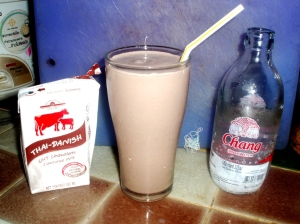 I drink this and become young again.