A Day in a Retired Life in Thailand

A Day in a Retired Life in Thailand

A lot of newly retired people wonder how they will spend their time once they don’t have a 9 to 5 job to go to.  In Thailand there are lots of alternatives.  Many retirees spend the majority of their days with a beer glass stuck to the end of their arms.  I elected to be a little more busy.  You can fill your days with as much as you want.  On my last birthday I jotted down how I spent my day and I thought I might share so you might get an idea of what your days can be like. Your retired life, wherever you are, will be what you make it.

I thought we would have a bit more free time to just hang out once we retired.  But our daily lives are a bit more hectic, somewhat exotic at times, and sometimes we just do simple stuff that we would be doing back in the States.  Whatever we do, there just never seems to be enough hours in the day.

The other day was my birthday so I thought I would jot down just how I spent the day so you would get an idea.

I usually awake at about 5:30 to the beautiful song of a magpie robin just outside my window.  He is there at the same time every morning.  He wakes all the other birds so a whole chorus is singing by the time I stir.

The first thing I do is log on to NPR.com and stream Morning Edition.  It is evening in America so the show is about 12 hours old by now but it is morning here so it seems appropriate.  That is how I use to wake up back in Seattle.

I also take this opportunity to check finance.yahoo.com to see how my investments have done (not good as usual) since the stock market in New York has just closed.  It tells me that I am not rich but I still have enough to remain retired for a while.  So I once again put off the idea that I will have to go back to work.

By 6:30 I have heard enough of the news of the world.  I often go for a bicycle ride at this time, out in the university research fields nearby our house.  They are right at the base of the mountains and it’s a great place to go bird watching in the morning.  Later in the day it will be too hot.

But today I use this time to spend an hour or so working in our garden.  It rained last night so today I need to go out to do some work in the Oxygen Farm.  That is what I call the piece of land we bought just next to our house.  People ask me what I produce on my land.  I tell them I produce oxygen.  We have planted about 70 trees, flowering, fruiting, and jungle trees, and all together about 125 different species of plants and flowers.  Today I need to dig a trench as an outlet for some of the standing water there since it is the rainy season and it rains almost every day now.

After the digging I am covered in mud but I need to go and catch my five ducks (We are getting 2 eggs a day now, which is more than enough for our needs.).  We use to have more but two of them have gone missing in the last month.  It could be a mongoose but because of the one month time gap between the two disappearances I am thinking it is probably a large python.  They take that long to digest something as big as a duck.

About the size of the guy we are looking for.

Then I took the first of many showers during the day.  It is the best way to cool down.   I then had a small breakfast of croissants and some wild honey that some of the local villagers give us.  They get it from the forest here.  They always leave part of the hive so that the bees can rebuild and so that they will have more honey next year.  I wish everyone were so conservation minded.

After breakfast I checked my email and looked to see if Social Security has deposited my payment for this month.  It has been nice living off the government teat.  And my monthly check is just about enough to live on without using any of my savings.  That should continue as long as the Social Security system stays solvent.  I’ve got my fingers crossed.

This is the time when I usually do some writing.  Right now I write a retirement column for Chiang Mai City Life magazine (chiangmainews.com), write a language column on the web (womenlearnthai.com), work on my website (retire2thailand.com), or my blog (retire2thailand.wordpress.com), or work on my English textbook series Professional English for Thailand (silkwormbooks.com).  I wonder when I ever had time to go to work before I retired.

Then, while I am editing my retirement column “A Reitring Attitude”, I heard my wife Pikun, who has been doing some weed whacking down in the garden, call out “Snake”.  I hoped it is that python we are looking for and ran down to help.

We caught a small black and yellow banded snake. I immediately thought it could be a banded krait, a very poisonous snake.  Most Thais would kill the snake right there but I won’t allow the killing of any animal on our property so we jar it up and will call the zoo later.  We volunteer at the reptile department at the Chiang Mai Zoo and work with the reptile curator because we have started a sanctuary for endangered mountain tortoises.  So far we have 50 with 10 more babies born in our garden over the last couple of years.  Some day we will return them to the wild; somewhere far from the people who would catch and eat them.  Until then we enjoy watching them roam the garden in the evenings, go through their mating rituals, and laying their eggs.  I call the wide fenced off area of our garden “Jurassic Park”. 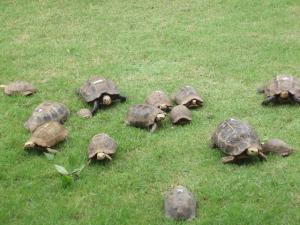 A Bale of Tortoises 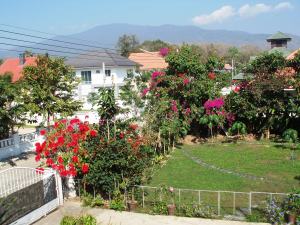 We then got ready to go to lunch at a nice hotel buffet to celebrate my birthday.  Birthdays are no big deal for me but at least it is an excuse to go out.  On the way there we stopped by the local roadside restaurant near our village to give the owner one of our mangoes.  We are proud of our mango since it is what we consider to be huge, weighing in at 1.1 kilos.  The restaurant owner reciprocated by giving us one of his mangoes.  It’s huger and weighs more than 2 kilos.  We’ll just have to work harder next year at growing bigger mangoes.

Lunch was fun, topped off with crepe suzettes with ice cream.  I almost always eat only Thai food but every once in a while crepe suzettes are fun.  Lunch was an all you can eat buffet with great Thai and western food, sushi, soups, salads.  A normal lunch of  noodles or a rice dish would cost about $1.00 each.  Today we splurge by spending a whopping $3.50 each.

After we return home from lunch a friend brings by a birthday cake.  Pikun let slip earlier to our neighbors that it was my birthday.  The cake is made with some Thai spices that might turn off the western palate but I like it and it was a nice gesture.  Thais are forever bringing each other food and fruit and sweets.  It is a nice feeling.

Then I took one of my power naps and woke 30 minutes later feeling great.  That is when I started to prepare this blog entry for posting.

Later I sat on the upstairs porch reading the Thai version of Readers Digest.  I try to spend at least one hour a day studying Thai.  They say that keeping your mind active is one way to stave off senility.  Well, Thai is so difficult and gives my mind such a work out that I’ll be 120 before my brain starts to slow down.  After, I spent a little time watching the farm making oxygen and listening to blues on the stereo.  I then read one chapter of Homer’s Iliad, one of the books I am reading.  I am at the part where Patroclos gets himself killed pretending to be Achilles by wearing his armor, and Achilles goes nuts and starts killing everyone.  This story takes place about 3,500 years ago and Man hasn’t changed a bit in all that time.  Let’s see, in keeping with my habit of always reading a few books at a time, I am also reading Isabel Allende’s Of Love and Shadows, James Glieck’s biography of Isaac Newton, and something by Tom Clancy – they are all pretty much the same.

I had some time so I motorcycled over to the nearby driving range and hit some balls.  Four trays of 40 balls each costs about $3.00.  Golf is a terrible game, and is more or less a waste of time, but it is addicting and I can’t wait to play again.  Only a golfer or a Zen master can understand a contradiction like that.  Most golfers know why life is as long as it is. It takes that long to learn this bloody game.  I try to play at least once a week.  A round of 18 holes with caddie costs about $12.00

After having a small dinner, Pikun went night hiking with the people at the zoo who are doing a survey of the frogs and reptiles on the mountain.  She found out that our snake wasn’t a banded krait after all.  It is a look-alike Laotian wolf snake. See for yourself.

The jungle is cooler at night but very humid this time of year.  My ankle is giving me trouble so I elected to stay home.  So I sat down and watched Fellini’s La Dolce Vita.  A few of us old Chiang Mai hands have gotten together and stated a film club with films that we can’t just download from the Internet.  We have more than 500 films in our collection now, from Japanese samurai flics to Fellini, to Peckinpaw, to Harold and Maud (my selection).  I can’t see why the Vatican would ban La Dolce Vita since it seems very tame by today’s standards.  Maybe they thought the whole world would become decadent like the characters in the story.  Hey, they were right.  And Anita Ekberg looks stunning.  I have been to the Trevi Fountain in Rome where she jumps in but never, never saw anyone who looked like her.  I later watched some of the quarter finals of the French Open on TV.

Later, Pikun, the Jungle Woman, came home.  They found some Asiatic Giant Frogs in the forest, something similar to this guy.

These things are huge and weigh more than 3 kilos and stretched out must be about 2 feet long.  It could feed a whole family.  But luckily the people who found them were doing research for the zoo so the frogs are safe from the stew pot for now.

Before going to bed I logged on to look at my investments one more time since the markets are open again.  I’m still not rich but still retired.  I go to bed listening to the tree frogs, bull frogs, and night birds out in the garden and wondering where that python could be.  I fall asleep with the BBC’s World Report streaming from the Internet and some rain drops just beginning to fall.